Alcohol and Arthritis: How Drinking Affects Your Joints, and 4 Tips for Indulging Safely

Must arthritis mean the end to happy hour? The short answer: Probably not.

In any given month, more than half of adults in the United States have raised at least one glass of wine, beer or hard liquor. But is it safe to drink alcohol if you’re one of the one million or so Australians living with inflammatory arthritis?

For years, the American College of Rheumatology has advised avoiding alcohol almost entirely if you take methotrexate, one of the most commonly used treatments for rheumatoid arthritis (RA) and some other forms of inflammatory arthritis. “Alcohol significantly increases the risk of liver damage while taking methotrexate,” the College explains.

But studies conducted over recent years may point toward a more nuanced view of alcohol use in the future. In 2017, researchers at the University of Manchester in England found no increased risk of liver damage in patients on methotrexate who consumed less than 14 units of alcohol per week.

For example, one standard drink equates to:

Can Alcohol Make Your Arthritis Worse?

The answer may largely depend on what medications you take to treat your arthritis — as well as how as how much/often you drink, and what your other personal risk factors are.

There’s no direct evidence that alcohol has either a positive or negative impact on the condition of arthritic joints, says Rebecca L Manno, MD, MHS, assistant professor of medicine in the Johns Hopkins Arthritis Center in Baltimore.

That said, individuals differ in how alcohol influences how their joints feel. “If you notice that every time you drink beer your joints are more achy and sore, it’s not in your head. It probably means that beer is pro-inflammatory for you. For someone else it might have the opposite effect, easing inflammation. If alcohol makes you feel lousy, it’s not helping you or your arthritis,” says Dr Manno.

How Arthritis Medications Interact With Alcohol

What you are prescribed to control your arthritis will largely determine what your doctor advises about alcohol use.

Methotrexate, leflunomide and some other disease-modifying antirheumatic drugs (DMARDs) and biologics can elevate liver enzymes and, in some cases, lead to fibrosis and other liver damage. Alcohol use increases that risk, so your doctor may advise limiting your intake to an occasional glass of champagne to celebrate New Year’s or a wedding.

“It’s all about the dose. Whenever you mix any medication with another substance like alcohol that is metabolised by the liver, you have the potential to accelerate toxicity to the liver. I applaud patients who think about interactions with what they eat and drink and want to talk about their specific medications and the amount of alcohol they use,” Dr Manno says.

If you do consume alcohol regularly and that’s an important part of your lifestyle you don’t want to change, your doctor may reconsider what medication they prescribe.

“Two options are hydroxychloroquine (Plaquenil®), which is a mild medication, and sulphasalazine (Salazopyrin®), which can be used in patients with alcohol use and/or mild liver disease. Sulphasalazine does require routine liver function monitoring,” says Marcy B Bolster, MD, associate professor of medicine at Harvard Medical School and director of the rheumatology fellowship training program at Massachusetts General Hospital in Boston.

In addition to disease-modifying drugs, you may be using non-steroidal anti-inflammatory drugs (NSAIDs) such as ibuprofen and naproxen to ease inflammation and pain during flare-ups. NSAIDs can irritate the stomach lining and sometimes lead to ulcers or bleeding in the digestive tract.

The more alcohol you drink, the higher the risk of this complication, according to a Harvard Medical School study from 2016.

Without doing further damage to your joints or promoting medication side effects, alcohol may interfere with other ways of reducing arthritis pain. For example, your doctor will want you to get the best night’s sleep possible, since most people with rheumatoid arthritis experience problems with sleep.

University of Pennsylvania researchers found that RA patients with low-quality sleep are in more pain, more depressed and function less well than those who sleep better. Alcohol may make you drowsy, but it messes with sleep quality, says Dr Manno.

In addition, because alcohol has lots of calories, and many cocktails are loaded with added sugar, drinking can make it more difficult to achieve other goals that ease pain and improve function: building muscle mass, reducing body fat and losing weight.

But Can Alcohol *Help* People with Arthritis?

Alcohol has some heart-health benefits, such as providing a modest increase in “good” HDL cholesterol. And the American Heart Association notes that studies have found that drinking alcohol may be associated with reduced mortality due to heart disease in some populations.

“When that methotrexate study showed that it is possibly safe for people on methotrexate to consume small amounts of alcohol, that opened the door for us to ask whether patients with rheumatoid arthritis, who are at higher risk of heart disease, could safely consume some alcohol and reap the associated cardioprotective effects,” says Dr Bolster.

In a large primary care database from the United Kingdom, Dr Bolster and her colleagues evaluated an eight-year period of time and found that patients on methotrexate and other disease-modifying antirheumatic drugs (DMARDs) were more likely to survive and less likely to have a heart attack or stroke if they consumed mild to moderate amounts of alcohol. The researchers presented their early findings at the 2018 annual meeting of the American College of Rheumatology.

“I’m not sure this changes what I can tell patients now, but it’s certainly intriguing and calls for further exploration. We look forward to learning more so we can guide our patients better in the future,” says Dr Bolster.

If you’re not on a medication that’s potentially toxic to the liver and your doctor sees no other signs that alcohol is interfering with your health, there’s no reason you can’t sometimes enjoy the relaxation, sociability and potential health benefits of a little alcohol, says Dr Bolster. “If you want a drink, that’s fine, but always in moderation.”

Follow these guidelines to avoid experiencing negative side effects of drinking alcohol on your arthritis.

This article has been adapted, with permission, from a corresponding article by Susan Ince on the CreakyJoints US website. Some text and information have been changed to suit our Australian audience. 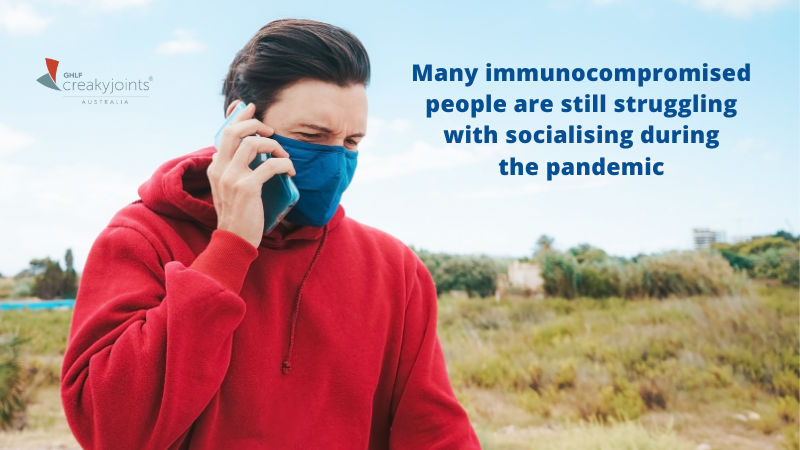